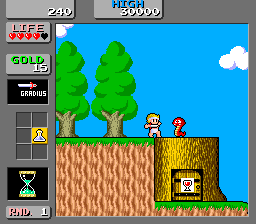 Eleven years have gone by since Tom-Tom rescued his girlfriend Tanya from the clutches of the evil King. Word of Tom-Tom's dangerous adventure soon spread throughout Wonder Land. The people were very proud of him and gave Tom-Tom the highest honor of all - the legendary name of Wonder Boy. With the evil King defeated, Wonder Land returned to its peaceful state, and for over one decade, the kingdom was a paradise, and everything and everyone lived happily together.

Eventually, the peace was broken when a ferocious fire-breathing dragon appeared out of nowhere and took over Wonder Land with an army of evil, monsterous henchmen, causing Wonder Land was immediately thrown into utter chaos. Defenseless that they were, the people were quickly taken over and the tranquil and serene kingdom was transformed into a land of demons and devils. Wonder Land was now a Monster Land. Tom-Tom was summoned to set out on a journey, destroy this dragon, and restore peace once again. Tom-Tom is Wonder Land's last hope.

There are twelve locations in which Tom-Tom must venture through, including (but not limited to): the city of Wonder Land, Valley of Peace, The Coastal Town of Baraboro, The Mam Desert, and Pororo Islands. During his journey, he must defeat monsters with the sword that he got at the beginning of his adventure. These monsters will leave either gold coins or bags of cash, which he can use to buy better weapons, shields, armors, and boots. At the end of each location, there is usually a boss that Tom-Tom must defeat in order to obtain a gold key that will unlock the exit gate, as well as plenty of gold coins or bags of cash. If he touches any enemies, or is shot at, he will lose health. During his travels, Tom-Tom must take note of the hourglass; if the hourglass display sands at the bottom, he must get another one that appears out of nowhere, or he'll also lose health. There are two ways in which he can restore it. He can either go into bars to have a drink that will restore it and get a hint about what lies ahead as well, or go into hospitals and heal himself to restore the lost health.